Endometriosis may be defined as the presence of the inner lining cells of the uterus outside the uterine cavity. Such cells might be present in the abdominal cavity or might be encapsulated within a cyst in the ovary. With such encapsulation, the bleeding from the inner lining of the cyst gets brownish in color, like melted chocolate. Hence, these cysts are referred to as chocolate cysts.  Endometriosis might also be encountered in rare locations, including the intestine, lungs etc.

The cardinal symptoms of endometriosis are chronic pelvic pain and infertility. Pelvis pain might be manifested by pain during menstruation (dysmenorrhea), pain during intercourse (dyspareunnea) or pelvic pain not related to menses. However, the presence and extent of chronic pelvic pain is not related to the extent of disease. In other words, patients with early-stage disease may suffer from long-lasting severe pelvic pain, whereas patients with late-stage disease might be pain-free.

Chocolate cysts are as a rule of thumb benign in nature; the risk of malignancy in such cysts is 4-6/1,000 (%0.4-%0.6). Therefore, regardless of the size, number and whether it is uni- or bi-lateral, surgery is not performed to rule out cancer.

In patients with long-lasting severe chronic pelvic pain, laparoscopy (closed surgery via 1-cm opening through the umbilicus) might be performed. During laparoscopy, the cyst capsule is taken out, the endometrotic foci are destroyed and the adhesions lysed. Post-laparoscopy, medical treatment is commenced in such cases.

Infertility is the other major presenting symptom of patients with endometriosis. Laparoscopy might be employed in selected infertile couples. When the female age is <36-yr old, with short-long infertility (less than 2-3 yr), good ovarian reserve, no male factor and uni-lateral endometrioma, laparoscopy might be considered to enhance fertility. However, laparoscopy should not be considered in patients not fulfilling these criteria. Conception rate is around 50% in the first year post-laparoscopy. If the couple fails to conceive in the first year following surgery, it should be considered as failure and IVF should be recommended.

However, more recently, it has been shown that laparoscopic removal of endometrioma is associated with decreased ovarian reserve, even performed by senior endoscopists due to inadvertent removal of healthy ovarian tissue along with the cyst capsule. Therefore, we do less and less surgeries for such cases.

We do not plan pre-IVF surgery for endometriomas in patients planned to undergo IVF. The reasons are i) such surgery does not further augment live birth rates; ii) surgery diminishes ovarian reserve even in the hands of experienced surgeons.

We published our experience for IVF due to endometriosis-associated infertility 3 times during the past 15 years in peer review international journals. In these series, we did not note any detrimental effect of endometriosis on pregnancy rates achieved with IVF. 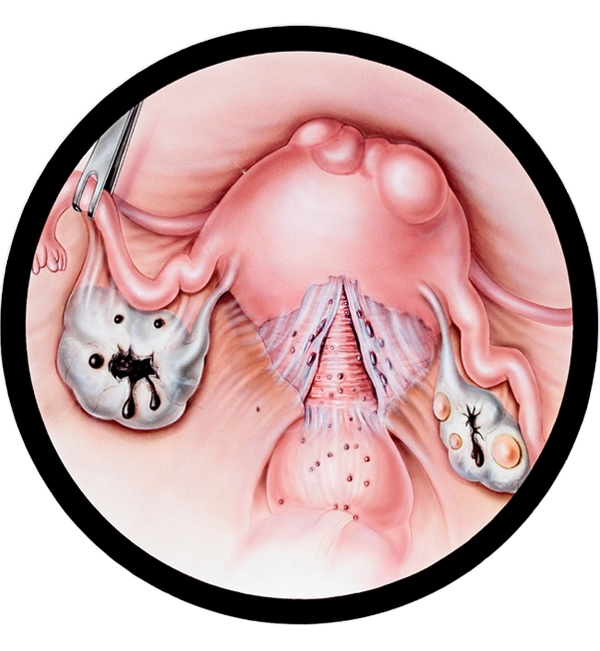